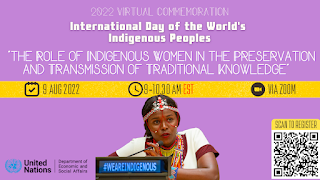 The International Day of the World’s Indigenous Peoples is celebrated annually and globally on August 9th. It is also a day to recognize the history and contributions of Indigenous Peoples worldwide along with their resiliency, passion and commitment to preserve and maintain their languages, cultures and traditional knowledge.

According to the World Health Organization:

Indigenous peoples are inheritors and practitioners of unique cultures and ways of relating to people and the environment.  Indigenous peoples’ conceptualization of health and well-being is generally broader and more holistic, with health frequently viewed as both an individual and a collective right, strongly determined by community, land and the natural environment.  Article 24 of the United Nations Declaration on the Rights of Indigenous Peoples recognizes the right of indigenous peoples to their traditional medicines, to maintain their health practices and to access social and health services without discrimination.  WHO Reference, 2022

Isa Mundo has worked with many Indigenous groups and organizations around the world and in Canada supporting learning centres in Peru, orphanages in Guatemala, health services in the Philippines and First Nations communities in British Columbia. We will continue to provide support via our education initiatives and work with local Indigenous organizations to ensure children and youth attain basic primary education and access to a safe and healthy learning environment.

To learn more and contribute to this day, visit the United Nations website on the International Day of the World’s Indigenous Peoples 2022.