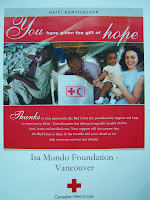 Isa Mundo Foundation completed its Helping Hand to Haiti Campaign in mid March and we were able to raise over $600 in 30 days to help the people of Haiti. Isa Mundo visited the Red Cross head office in Burnaby, British Columbia to drop off the funds and meet the great people of Red Cross working diligently to deliver urgent supplies and donations to Haiti.

We look forward to working with Red Cross again in the future and we would like to once again thank the supporters and friends of Isa Mundo for responding to our last minute campaign.

Scott from Merlyn Power and Pierre, an Isa Mundo volunteer spent the week in Puerto Vallarta working with Oscar and Carlos at Pasitos de Luz to set-up for the arrival of the solar panels. Scott and Pierre's trip was planned so that they could install the panels while in Mexico. Unfortunately, the week went by and the panel never arrived; they were stuck at the customs office in Guadalajara. It was a good lesson learned for all of us! Even though we knew we might encounter delays, we did not account for so many days of delay. The trip was a success despite the lack of solar panels. The four gentlemen labored away clearing the roof and building a frame in anticipation of the panels. Scott trained Oscar and Carlos for the installation of the panels and possible future support for the sustainability of this project which will be operated and repaired by Pasitos de Luz. They also spent some time learning a bit of Spanish, English and French…a multicultural effort! All in all, the four of them were a great team. Thank you for your dedication to this project!
Posted by Isa Mundo Foundation at Friday, March 12, 2010