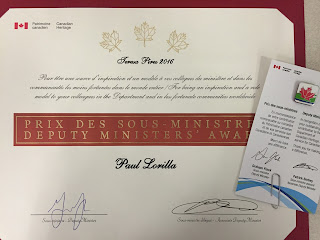 We would like to congratulate Isa Mundo Foundation's Founder and Director, Paul Lorilla for being awarded the Teresa Pires Award. Paul was recognized for his commitment to indigenous issues at the Department of Canadian Heritage and his humanitarian efforts through the Isa Mundo Foundation.  The Teresa Pires recognition is part of the Department's Deputy Ministers' Award which recognizes a public servant who has inspired his peers and motivate others to give back to their communities.

As stated in his nomination: "Paul approaches his career work with the same passion, commitment and practicality that leads to his success with the Foundation - while creating an inclusive and sharing environment.  The way he has balanced his many roles has been an inspiration and makes him a true public servant'.